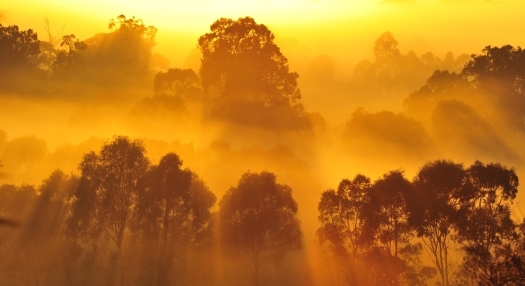 “Once a soul has come to understand something of the unutterable majesty of the holiness of God,” writes L. Michael Morales, “the question asked in Psalm 15 and 24 suddenly weighs upon the heart: “Who shall ascend the mountain of the LORD?” That is, who can draw near to this living God in worship? . . . . Who, what’s more, could ever abide with God in his house?”

He continues, “Ezekiel 28:13-14 describes the Garden of Eden as being upon “the holy mountain of God”, . . . . Our first parents, then, had tasted the bliss of living in the Presence of God upon the holy mount. . . . . But from this breath-taking height, radiant with the countenance of God, Adam’s sin plunged all humanity into the dark abyss of exile from the divine Presence – a ‘Fall’, to be sure. Humanity, once enjoying the paradise of God himself, was made to descend the mountain of the LORD. Who, now, shall ascend? . . . . The tragedy of the Fall is the catastrophe about which the drama of the Bible turns, a drama that finds its denouement (or resolution) through the promised Messiah who, in bearing our sins upon the Cross so to bear the holy wrath, will one day bear us into the glory of our Father’s Presence. . . . . Between the original creation (and subsequent Fall) described at the beginning of Genesis and the glory of humanity dwelling with God in the new creation at the end of Revelation, there is a sweeping drama. . . . all the biblical narratives following the Fall of Genesis 3 are in some fashion or another, and by varying degrees, moving this drama forward, developing the plot that eventually resolves in, to borrow Dante’s insight, a “comedy”. That plot can be followed by keeping one’s eye (and, surely, one’s heart) fixed upon the central question given us in Israel’s book of worship: “Who shall ascend the mountain of the LORD?” This theme at the heart of Scripture would, I think, be profitable for us to explore together….”

Dr. Morales briefly and deftly explores this theme through Genesis and Exodus, until the LORD’s glory-cloud descended upon the Tabernacle. He concludes, “. . . the Tabernacle had become Israel’s portable Mount of the LORD, that is, Israel’s regulated means of approaching God. The Tabernacle cultus, then, was a theological drama. This drama called upon memory, looking back to Adam’s lost communion with the Creator atop Eden’s mount. More profoundly, this drama called upon faith, prophetically looking forward to the last Adam and ultimate High Priest’s ascent into the reality of the heavenly Zion’s summit.”

L. Michael Morales is the author of Who Shall Ascend the Mountain of the Lord?: A Biblical Theology of the Book of Leviticus. In this brilliant study of the Book of Leviticus, we learn about the book’s narrative context, literary structure and dramatic movement, and theology. And the author tracks the development from the Tabernacle to Zion’s temple and through to the heavenly Mount Zion in the New Testament. Dr. Morales shows how life with God in the house of God was God’s original goal for His creation – and thus is the goal of God’s plan of redemption, a plan that culminates in the new creation. See the publisher’s description HERE (please note: the first of the reviews on that page is about a another book, and is placed here in error).

One Reply to “‘Who shall ascend the mountain of the Lord?’ by L. Michael Morales”

This site uses Akismet to reduce spam. Learn how your comment data is processed.