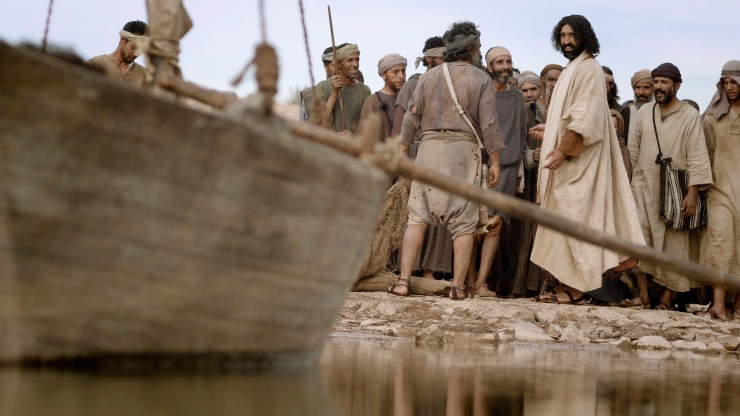 Jesus calls his first disciples – a scene from one of the LUMO Project videos.

The LUMO Project has produced a series of videos of the four Gospels. These videos are quite simply, stunning. Three key features make these the finest videos of the Gospels yet produced.

Firstly, the voice-over is a narration of the Bible text – nothing is added, and nothing is removed. The actors in the film speak Aramaic, as it was spoken in Jesus’ time. But their dialogue is muted, and overlaid with narration of the unabridged Biblical text as the script.

Secondly, the scenery was shot on location in Morocco, and tries to be faithful to the first-century Palestinian world of the Gospels. The LUMO Project used CGI to reconstruct the city of Jerusalem as seen from a distance.

Thirdly, and uniquely, the actors look the part of first-century Palestinian people. In the December 2002 issue of Popular Mechanics, an article by Mike Fillon, entitled The Real Face of Jesus, described how scientists and archaeologists used forensic anthropology to reconstruct what a first-century Galilean man might have looked like. The image is quite different from the Western face we typically see depicted in paintings and films of Jesus. The faces of the actors in the LUMO videos, including the man who plays Jesus, reflect the face in the reconstruction depicted in this article.

LUMO’s main YouTube channel is HERE; as well as links to the Gospel videos in English and other languages, you can view the LUMO trailer, and videos that explain how the LUMO project was produced.

Justin Taylor writes, on the Gospel Coalition website: “I am a big fan of the Lumo Project, which is seeking—for the first time—to film all four Gospels as feature films, using only the unabridged biblical text as their script.” Read his review HERE.

You can buy the LUMO videos on Amazon USA and Amazon UK. These videos contain both the NIV and the KJV narrations. LUMO is also available for purchase on both Amazon and iTunes as digital downloads, and the series is also available on the YouVersion app in more than 23 languages.