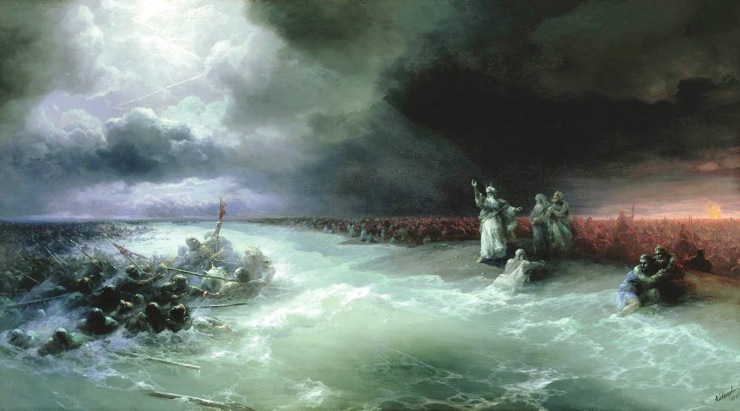 Passage of the Jews through the Red Sea (also titled And Moses Stretched Forth His Hand over the Sea) by Ivan Aivazovsky (1817–1900) (held by the K. and E. Sogoyan Collection, USA). Pharaoh’s forces are depicted being engulfed in the sea as they pursue the Israelites.

Last session, we saw how God called Abram to follow Him. Abram was like a new Adam. God was making a new start. Adam was the father of humanity; Abram would be “the father of a multitude of nations” (Genesis 17.4) – the father of God’s new humanity. God’s call to Abram launched a whole new phase in God’s plan to rescue mankind from Satan’s dominion, and to make Earth a paradise where He and mankind could live together.

In this session, we look at the lives of Abraham, Isaac, Jacob, Joseph and Moses. And we see how God rescues His fledgling nation from Egypt through the Passover and the Exodus, and launches them on their journey to the Promised Land.

On our route, we’ll see how God revealed Himself to people – especially though His Names. And we’ll see God training and preparing individuals to serve Him. God brings us ‘up close and personal’ to Abraham, to Jacob and to Moses. These men had their flaws, but God worked wonderfully in their lives through His word to them and through their circumstances.

Click the PDF icon below
to download the full study.
It’s a 20-page PDF document
illustrated in full colour throughout.

At the end you’ll find Bible passages to read and questions for individual or small group study.

Click the PDF icon below to download
a PDF of this summary, together with the Bible passages and questions.

Last session ended with God calling Abram to go to the land that He would show him. God made a covenant with him, saying: “I will make of you a great nation, and I will bless you and make your name great, so that you will be a blessing. . . . and in you all the families of the earth shall be blessed.” (Genesis 12.2-3). Abram “obeyed and went, even though he did not know where he was going” (Hebrews 11.8, NIV).

This launched a whole new phase in God’s plan for humanity. The Bible now leaves the arena of world history, and focuses on this man and his offspring.

During this period of Bible history, God brings us ‘up close and personal’ to Abraham, to Jacob and to Moses. These men had their flaws, but God worked in their lives in wonderful ways. All three found a place in the great ‘portrait gallery of faith’ of Hebrews 11.

God repeated and expanded His covenant promises to Abram a number of times (Genesis 12.7, 13.14-17, 15.1-21, 17.1-21, 18.9-15, 21.12, 22.15-18). God confirmed these promises by a covenant ceremony that we read about in Genesis 15.1-21. This ceremony involved cutting animal sacrifices in half and walking between the pieces. But Abram never walked down the corridor with God – God alone (appearing as “a smoking firepot and a flaming torch” ) a passed between the sacrifices. God wanted to make quite certain this covenant could never be broken by mankind’s weakness or sin. God took upon Himself the curse of death if this covenant should ever be broken. And that’s what He did when Jesus died on the Cross for our sins.

Though his faith faltered at times, Abram believed God. And God “credited it to him as righteousness” (Genesis 15.6, NIV). That’s quoted in Romans 4.3, Galatians 3.6 and James 2.23. And it’s echoed by Habakkuk when he says “the just shall live by his faith” (Habakkuk 2.4). Abram’s faith in God is pivotal to the whole Bible story. Abram was a ‘new Adam’. He did what the first Adam refused to do – trust God and obey Him.

Many years after the covenant ceremony, God gave Abram a sign of His covenant with him – circumcision. He “received the sign of circumcision as a seal of the righteousness that he had by faith . . .” (Romans 4.11). At this point, too, God gave Abram and his wife new names – Abraham and Sarah.

The people of Babel built themselves a city and a tower – as we saw in the last session. But Abram never built a city; he lived in tents. Instead, we find him building altars. He was “looking forward to the city that has foundations, whose designer and builder is God” (Hebrews 11.10).

One day, the promised son, Isaac, was born to Abraham and Sarah. Some years later God said to Abraham: “Take your son, your only son Isaac, whom you love, and go to the land of Moriah, and offer him there as a burnt offering on one of the mountains of which I shall tell you.” (Genesis 22.2). Isaac was probably at least a teenager now. Abraham obeyed, assuring his son that God would “provide for himself the lamb for a burnt offering” (Genesis 22.8). God did indeed provide a ram as the sacrifice instead of Isaac. And this sacrifice foreshadows the greatest sacrifice – Jesus’s sacrifice for us on the Cross. He was the Lamb of God Who died in our place.

God confirmed to Isaac the promises which He had made to his father Abraham. God healed the barrenness of Isaac’s wife, Rebekah, and she bore twins – Esau the eldest, and Jacob. But wily trickster Jacob took the firstborn’s blessing from Esau. Esau resolved to kill Jacob. So Isaac sent Jacob off to Uncle Laban in Haran, to give Esau time to cool off.

But on his journey, God met with Jacob in a dream. God confirmed to him the promises He had made to Abraham and Isaac – adding “I am with you and will keep you wherever you go, and will bring you back to this land.” (Genesis 28.15).

Years of trial and difficulty followed; then Jacob returned home. On the way, he was reconciled with Esau. But the night before Jacob met Esau, God met with Jacob. In angelic form, God wrestled with him and dislocated his hip – the wrestler’s pivot of strength. But Jacob hung on, saying “I will not let you go unless you bless me” (Genesis 32.26). God renamed him ‘Israel’, saying “for you have striven with God and with men, and have prevailed” (Genesis 32.28). Jacob’s natural strength was broken. He obtained God’s blessing through the tenacity of believing prayer.

Jacob had 12 sons, from whom sprang the 12 tribes of Israel. The second youngest was Joseph, his father’s favourite. Joseph began as (in Bruce Waltke’s words) “a bratty talebearer” . He emerged as a righteous and wise leader. He endured slavery, a seductress’s advances, and wrongful imprisonment – all without fault. He rose to be Pharaoh’s chief minister. From this exalted position, Joseph saved God’s people – and all Egypt – from starvation. Pharaoh offered Joseph’s family “the best of the land of Egypt” (Genesis 45.18) to live in. God was behind the scenes, working his purposes out.

And so Jacob and his family moved to Egypt and flourished. At the end of his life, Jacob prophesied over his twelve sons (Genesis 49.1-28). Over Judah, he prophesied: “The scepter will not depart from Judah, nor the ruler’s staff from between his feet, until he to whom it belongs shall come and the obedience of the nations shall be his.” (Genesis 49.10 NIV). The word “it” refers to the sceptre. A king shall arise, who will be of the tribe of Judah. This prophecy is pointing to King David and his empire, and beyond him to David’s Son, Jesus.

The fledgling nation of Israel flourished. God was beginning to make Abraham’s offspring into a great nation, just as He promised.

But, fearing how numerous and powerful they were becoming, another Pharaoh enslaved Israel. As a last desperate measure, Pharaoh commanded that every baby Israelite boy must be killed.

So God set His rescue plan in motion. For this task, God prepared a man called Moses. As Pharaoh’s adopted grandson, Moses was educated “in all the wisdom of the Egyptians” (Acts 7.22). Forty years of preparation as a shepherd in the wilderness followed. Only then did God commission him – appearing to him in a burning bush, a visible manifestation of His presence.

Through Moses’ leadership, God rescued His people from slavery in Egypt. God sent ten plagues to bring the Egyptians to heel. In Jim Townsend’s words, “the totality of the plagues serves as an artillery bombardment upon the false deities of Egypt”. God was demonstrating to Egypt that He, and not their many gods, was Lord over all the Earth.

The final and most terrible was the death of the firstborn. Before this final scourge, God told Moses that His people must eat a special sacrificial meal, called the Passover. The animal’s blood was to be smeared on the door-frame of their houses. And they were to eat hastily, dressed ready to depart at a moment’s notice.

This Passover meal marked a new step in the covenant relationship of God with His people. God was bound by His covenant with their forefathers – Abraham, Isaac and Jacob. He would now – in accordance with that covenant – rescue them from Egypt. In turn, those who ate the Passover meal would be set apart as His special people.

In panic, Pharaoh thrust God’s people out of his land. God parted the Sea of Reeds. His nation walked dry-shod to safety. God lovingly “took them by the hand to bring them out of the land of Egypt” (Jeremiah 31.32). The pursuing Egyptians drowned in the overflowing waters. God’s people were free at last! They sang for joy.

At the Passover and Exodus, God’s people Israel were born. It was their birthday. For the very first time, we read of “all the congregation of Israel” and “the whole assembly of the congregation of Israel” (Exodus 12.3,6). Accordingly, God appointed the month in which Passover occurred as the first month of their calendar year (Exodus 12.2). Each succeeding year, God’s people would kill a lamb and eat a Passover meal to celebrate their deliverance from Egypt.

And so God guided Israel into His presence at Sinai, and entered into solemn covenant with them, as we’ll see in our next session.

What does God promise to Abraham? How do these promises reflect God’s commission to Adam – and what’s the significance of this link?

Why does God keep making covenants?

Why does God tell Abraham and the men of his household to be circumcised?

Before their escape from Egypt, why does God command His people to slay a lamb? And why do they have to eat it?

How does the Exodus relate to the original creation and to the Flood? Why is this significant?