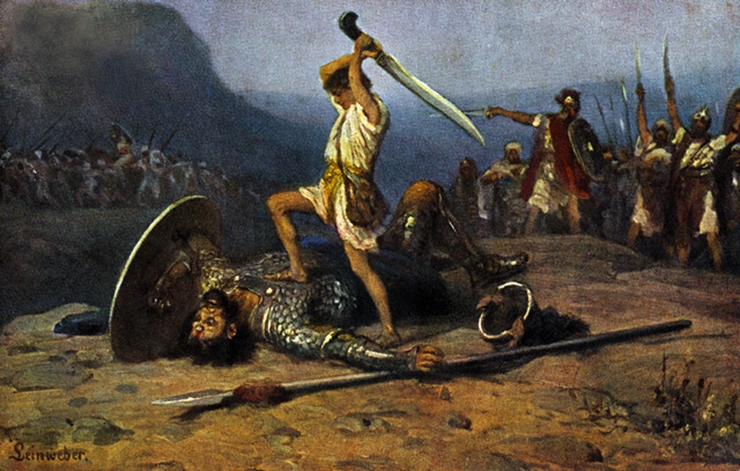 David and Goliath from Wikimedia

David and Goliath painted by Anton Robert Leinweber (1845-1921). In this painting, David is about to cut off the head of Goliath, the Philistine who defied “the armies of the living God” (1 Samuel 17.26). This foreshadows the time when the Son of David, Jesus Christ, would crush Satan.

After Adam and Eve had sinned in the Garden of Eden, God cursed the serpent, who had tempted them, (Genesis 3.14-15) and pronounced judgment on Eve (Genesis 3.16) and Adam (Genesis 3.17-19). To the serpent, he said, “Because you have done this, cursed are you above all livestock and above all beasts of the field; on your belly you shall go, and dust you shall eat all the days of your life. I will put enmity between you and the woman, and between your offspring and her offspring; he shall bruise your head, and you shall bruise his heel.” James Hamilton, Professor of Biblical Theology at The Southern Baptist Theological Seminary, writes, “God’s first act of judgment in the Bible is accompanied by his first promise of salvation, and the salvation will come through the judgment. As the serpent is cursed, he is told that he will proceed on his belly and that he will eat dust (Gen 3:14). Further, enmity is placed between him and the woman, and between his seed and the seed of the woman. This enmity will issue in the seed of the woman crushing the head of the serpent (3:15).” In his article, Dr. Hamilton highlights “the theme of the head crushing seed of the woman in the Bible.” He continues, “Even if at many points my interpretation of the data is disputed, this study will nevertheless contribute a catalog of the intertextual use of the theme of the smashing of the skulls of the enemies of God.” Dr. Hamilton finds imagery from Genesis 3.15 in many texts in both the Old and New Testaments – in his words, “the seed of the woman crushing the head(s) of the seed of the serpent, . . . shattered enemies, trampled enemies, dust eating defeated enemies, and smashed serpents.”

Unless otherwise indicated, all Scripture quotations are from The Holy Bible, English Standard Version, published by HarperCollins Publishers. © 2001 by Crossway Bibles, a division of Good News Publishers. Used by permission. All rights reserved.