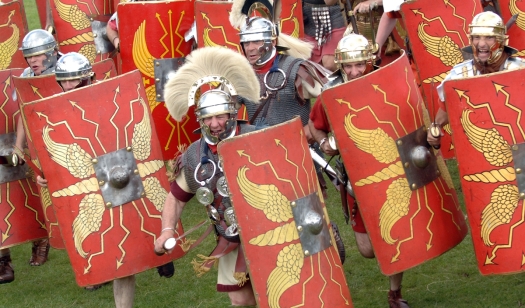 Roman soldiers charging – a re-enactment by the Ermine Street Guard. The Guard’s reconstructions are primarily from the latter half of the first century AD (the period of the early Church). Paul would therefore have been familiar with soldiers’ uniform of this type. In Ephesians 6.11-19, Paul pictures believers as Roman soldiers. He writes: “Put on the whole armour of God, that you may be able to stand against the schemes of the devil. For we do not wrestle against flesh and blood, but against the rulers, against the authorities, against the cosmic powers over this present darkness, against the spiritual forces of evil in the heavenly places.” He lists the pieces of armour that God provides: “the belt of truth” , “the breastplate of righteousness” , “as shoes for your feet, having put on the readiness given by the gospel of peace” , “the shield of faith, with which you can extinguish all the flaming darts of the evil one” , and “the helmet of salvation” . Our weapon is “the sword of the Spirit, which is the word of God” . Then he writes, “praying at all times in the Spirit, with all prayer and supplication. To that end, keep alert with all perseverance, making supplication for all the saints, and also for me, . . . .”

A key point that Batzig makes is this: “The idea of purification stands at the forefront of God’s command for Israel to destroy the nations in the land of Canaan.”

Batzig continues, “ . . . . “The several acts of Temple cleansing in the Old Testament pointed back to the conquest of Canaan and forward to the work of Christ (2 Chronicles 29.3-19; Nehemiah 13.4-31). . . . . At the beginning of his ministry our Lord said, “Destroy this Temple and in three days I will raise it up. (John 2.19); He “was speaking of the Temple of His body” (John 2.21). . . . . When Christ was crucified, the Temple was cleansed in the greatest act of judgment. In the destruction of His flesh, the sin of His people was cleansed (2 Corinthians 5.21). The Father declared Holy War on His people, and their sin, when He declared it on His Son. In the death of Jesus, the people of God were judged for their sins. When Jesus was crucified, we were crucified with Him (Galatians 2.20). The power of sin was destroyed (Galatians 5.24). When He rose, we rose with Him to newness of life (Romans 6.5-10; Colossians 3.3).”

Batzig tells us, “Today, the Church is engaged in Holy War. It is a war against the spiritual enemies who lay behind the kingdoms of this world (Ephesians 6.10-11). . . . . At the cross, Jesus disarmed principalities and powers (Colossians 2.13). In His ascension He plundered the enemy (Ephesians 4.8), freeing His people from the power of sin and the devil. We participate in His victory by participating in the Church’s mission. When sinners are converted, they undergo a spiritual death and resurrection. Their hearts are cleansed through faith in the crucified Savior. Wherever the message of the cross is proclaimed—and whenever believers engage in hand-to-hand combat with their sin—Holy War is being fought.”

CREDITS ► All Scripture citations (other than those made by other authors) are from The Holy Bible, English Standard Version, published by HarperCollins Publishers. © 2001 by Crossway Bibles, a division of Good News Publishers. Used by permission. All rights reserved.

This site uses Akismet to reduce spam. Learn how your comment data is processed.