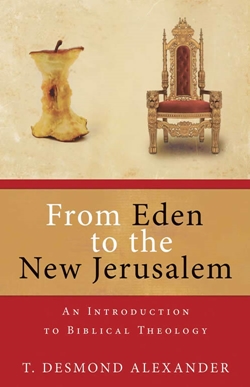 In this book, T. Desmond Alexander traces some of the central themes of the Bible story. Dr Alexander explores each theme in an unusual way – by beginning at the end of the Bible, in the final chapters of the Book of Revelation. In this way, he keeps the goal of God’s plan of redemption in view as we track each theme from Genesis onwards through the Bible.

There seven main chapters, bracketed by an introduction and conclusion. Here are the titles of these seven chapters; each is followed by an outline of the chapter’s content.

Chapter 2: “From sacred garden to holy city: experiencing the presence of God. ” This is by some way the longest chapter. It develops the central theme of God’s presence on Earth. We’re introduced to the end-goal of God’s plan: Revelation 21.1-3 describes the holy city that possibly fills the whole earth, and where God lives with His people. After an overview of the Bible’s theme of God’s dwelling on Earth, Alexander shows us that New Jerusalem is a temple-city. Then we’re taken back to the beginning: he shows us that God’s first dwelling place on Earth was the temple-garden of Eden. But after their sin, Alexander explains that God deprived Adam and Eve of their priestly status in God’s temple-garden; God’s plan that, in Alexander’s words, “the whole earth should become a holy garden-city” is jeopardised. Alexander briefly looks at the escalation of sin and God’s response by sending the Flood, and at the Babel project. Alexander then traces the path that God took to restore Earth to be His dwelling place with humanity – through the Tabernacle, the Temple in Jerusalem, and the Church as God’s temple. Finally, he looks briefly at the New Testament’s references to God’s promise of His city.

Chapter 3: “Thrown from the throne: re-establishing the sovereignty of God.” Alexander first looks at God’s sovereignty over Earth and mankind’s original vocation as God’s viceroys – as royal priests. But, as Alexander tells us, “By betraying God and obeying the serpent, the royal couple dethrone God” . He then traces the way God restored His sovereignty over the whole Earth – firstly, through Abraham and through the theocracy of Israel, and then through the Man Christ Jesus. The author shows that Christ is now God’s viceroy over Earth, a role that His Church – a royal priesthood – shares. As he writes, “By living in obedience to Christ, his disciples participate in the establishment of God’s kingdom on the earth.” Finally, he briefly looks forward to the time, pictured in Revelation chapters 21-22, when God is king over the whole Earth.

Chapter 4: “Dealing with the devil: destroying the source of evil.” In this chapter Alexander explains that Satan exercises authority over this world, and outlines how he came to do so. He traces the ensuing conflict between God and Satan as it is played out in the world. He looks at Jesus’ conflict with Satan, culminating in Jesus’s death, which seems to be a triumph for Satan. But, as he tells us, “Apparent defeat is dramatically turned into victory with the resurrection of Jesus. For this reason, Jesus can subsequently proclaim to his disciples, ‘All authority in heaven and on earth has been given to me’ (Matthew 28.18).” Finally, he briefly looks at the end of Satan’s domination as described in Revelation 20, and believers’ spiritual warfare in this present world.

Chapter 5: “The slaughter of the Lamb: accomplishing the redemption of creation. ” Five times, the last two chapters of Revelation refer to Jesus Christ as “the Lamb”; He is referred to as a “Lamb” 28 times in all. He briefly looks at the image of Christ as the Lamb in the Book of Revelation, then back to the Passover in Exodus. He writes that “the Lamb of Revelation 5 is undoubtedly associated with the Old Testament exodus story”. He takes us through the first Passover in Egypt. He explains that the Passover ritual in Egypt provided atonement and purification, and that Jesus’s sacrificial death provides atonement and purification for all believers. Dr Alexander also writes that eating the Passover lamb in Egypt made people holy; and that eating the New Testament equivalent – the Lord’s Supper – sanctifies believers. In his words, “Like the original Passover sacrifice, his death atones for the sin of the people, his blood purifies and cleanses, and those who eat his body at the Lord’s Supper share in his holy nature.” (However, it isn’t clear why eating the Lord’s Supper sanctifies us. I can personally see a connection, however. Both the Old Testament Passover and the Lord’s Supper are covenant meals. Participating in them reaffirms the covenant bond between the Lord and His people – that is, the God’s people are committed to and belong to the Lord – and so therefore are holy to the Lord.)

Chapter 6: “Feasting from the tree of life: reinvigorating the lives of people from every nation.” Alexander writes, “we have traced how God has acted to reclaim the earth as his own and build a temple-city by gradually establishing his presence and sovereignty through the theocracy of Israel and the church. Central to the redemptive activity of God is the cross of Christ, for through it Satan is defeated and human beings are enabled to regain the holy, royal status Adam and Eve lost. Building on these observations, this chapter explores how John’s vision of the New Jerusalem anticipates human existence as we have never known it. The life to come will be truly abundant and fully satisfying. This hope is reflected in themes found in Revelation 21–22 that reappear throughout the entire biblical meta-story, in particular, the concepts of ‘holy people’, ‘tree of life’ and ‘nations’.” Alexander look briefly at God’s people as holy people in His presence. He then explores what the Book of Leviticus teaches about holiness, cleanness/purity and uncleanness/impurity. Dr Alexander writes, “To be holy is to be unblemished or unmarred; it is to be complete, perfect, whole”. So he then looks at the bodily wholeness that will be part of our holiness – bodily perfection and immortality, with access to the tree of life. Finally, he looks at the ecological transformation of our planet, and the social harmony we’ll enjoy, where peoples from all races and nations will live in unity.

Chapter 7: “Strong foundations and solid walls: living securely among the people of God.” Dr Alexander makes it clear that the New Testament builds upon what is revealed in the Old Testament. He writes, “The continuity between the Old and New Testaments is also important because it provides a greater basis for believing in the reality of the future New Jerusalem. . . . . As our study has revealed, the New Jerusalem is a natural extension of all that has been revealed in the rest of the Bible.”. He then explores the contrasts between the New Jerusalem and the other city described in Revelation – Babylon. He explains, “Babylon and the New Jerusalem represent contrasting worlds.” Babylon is a prostitute; in Alexander’s “the city of Babylon represents humanity’s obsession with wealth and power, which become a substitute for knowing God” . New Jerusalem is a bride; Alexander writes, this city “promises holiness, wholeness and love in the presence of God.”. He points out, “the book of Revelation warns us to come out of Babylon and encourages us to take our stand with Christ”.

Dr Alexander specialises in the study of Pentateuch and Biblical Theology. This book is based on his expertise in these areas, and there’s substantial theological depth underpinning this book. It bridges the gap between books written at a popular level and those aimed at such people as seminary students and scholars. The book is relatively brief (less than 200 pages of text) and accessible. The text is accompanied by many footnotes, and there’s a 9-page select bibliography at the end.

T. Desmond Alexander is Senior Lecturer in Biblical Studies in Union Theological College, a constituent college of the Institute of Theology at Queen’s University Belfast. His research interests lie primarily in two areas: the Pentateuch and Biblical Theology. He has authored and edited a variety of articles and books.