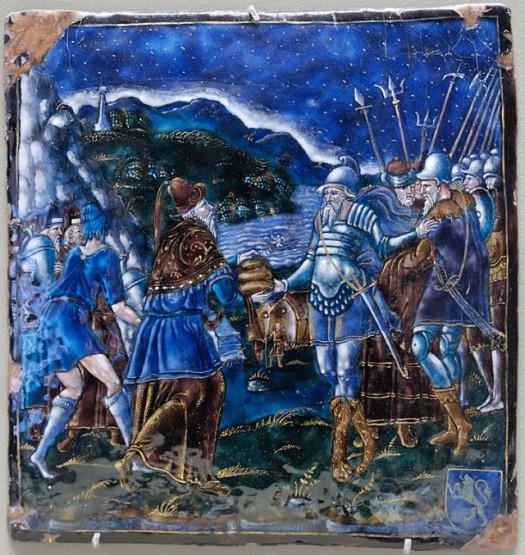 ‘Melchizedek and Abraham’, attributed to Colin Nouailher (painted between 1560 and 1570) and held by the Louvre. Melchizedek meets Abraham and his troops (the figures are depicted in clothing and armour of the 16th century).

Melchizedek isn’t a Bible character that we imagine anyone could get really excited about. Yet he’s one of the most significant pictures of Jesus in the Old Testament. He prefigures Jesus as our High Priest and King. Augustine wrote: “The New Testament is in the Old concealed; the Old is in the New revealed.” Melchizedek is one of the outstanding instances of this principle.

Melchizedek was the priest of the true God and king of Salem. Salem seems certain to have been the city later called Jerusalem. In Genesis 14 we read that Abraham and his allies defeated a confederation of kings who had seized Abraham’s nephew Lot. Then we read: “After his return from the defeat of Chedorlaomer and the kings who were with him, the king of Sodom went out to meet him at the Valley of Shaveh (that is, the King’s Valley). And Melchizedek king of Salem brought out bread and wine. (He was priest of God Most High.) And he blessed him and said, “Blessed be Abram by God Most High, Possessor of heaven and earth; and blessed be God Most High, who has delivered your enemies into your hand!” And Abram gave him a tenth of everything.” (Genesis 14.18-20). We next encounter Melchizedek in Psalm 110. David wrote: The LORD has sworn and will not change his mind, “You are a priest forever after the order of Melchizedek.” (Psalm 110.4). In the New Testament, the only passages that relate to Melchizedek are Hebrews 5.5-10, 6.20-7.25. The writer tells us: “So also Christ did not exalt himself to be made a high priest, but was appointed by him who said to him, “You are my Son, today I have begotten you”; as he says also in another place, “You are a priest forever, after the order of Melchizedek.” (Hebrews 5.5-6).

If anyone could get us excited about this mysterious Old Testament priestly king, it’s Don Carson – one of the finest Christian speakers and writers of the present day. Dr Carson tells us: “. . . precisely because he is both king and priest, the ﬁgure of Melchizedek turns out to be one of the most instructive ﬁgures in the entire Bible for helping us put our Bibles together. He helps us see clearly who Jesus is. . . . . . . . he turns out to be utterly revolutionary in opening our eyes to the glories of our Savior.” With his characteristically clear and compelling way, Dr Carson takes us through the Bible passages that relate to Melchizedek and explains how significant this man is.

Don Carson preached this message at The Gospel Coalition’s 2011 national conference at McCormick Place in Chicago. The eight plenary addresses from that conference, including Dr. Carson’s address, have been edited by Dr Carson and published under the title The Scriptures Testify about Me. The publishers’ descriptions of this book are online HERE and HERE.

Don Carson is Research Professor of New Testament at Trinity Evangelical Divinity School, Deerfield, Illinois, USA. Dr. Carson has written or edited more than fifty books, including The Gagging of God, An Introduction to the New Testament, A Call to Spiritual Reformation, How Long, O Lord? and The Difficult Doctrine of the Love of God. He has served as a pastor and is an active guest speaker in church and academic settings around the world.